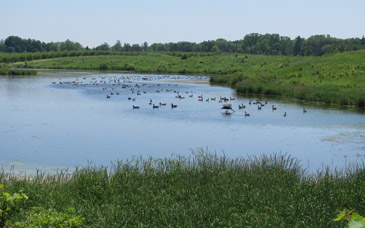 The site consists of a 3 ha pond and wetland, about 5.7 ha of upland grass habitat, and 2.87 ha of replanted areas. The pond was created circa 1994, when an intermittent tributary of the Black Creek Subwatershed which flowed through a small ravine was dammed for irrigation purposes. Prior to damming, the steep-sided site was marginal for agricultural production and was used to graze cattle. This site was named in memory of Max Schuyler, who passed away in 1995. Max had a passion for the outdoors and fishing and his grandchildren found the site a fitting memorial to him.

Over time, with the removal of cattle, and natural succession, the site has evolved into a wetland/early successional complex providing habitat for various species of waterfowl, upland birds, mammals, amphibians, and reptiles. These changes, have resulted in improved water quality of the Black Creek Subwatershed tributary, and generally increased Norfolk County’s biodiversity. This site has the potential to support a diverse native ecosystem which Schuyler Farms Limited would like to see further developed and preserved.